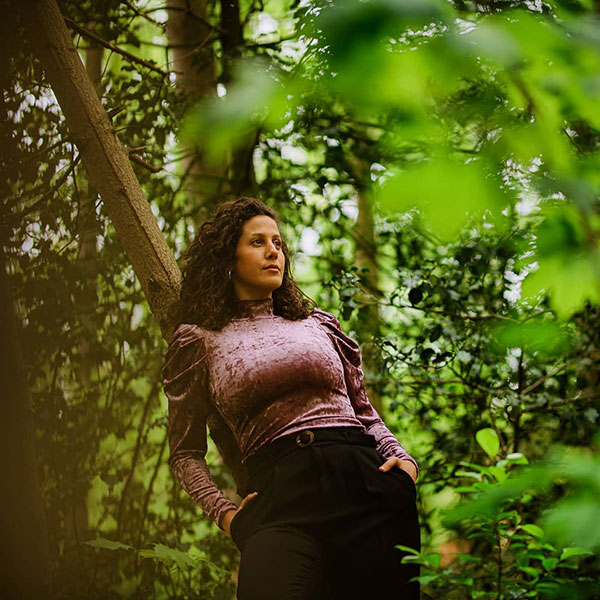 My album’s name is ‘Strangers In My Dreams’ and contains my original compositions I wrote in the past few years in Amsterdam and Jerusalem. My songs deal with themes of dreams vs reality, hope, anxiety, liberation, and love. For me, the Theme song, “Strangers In My Dreams’ reflects the subconscious and its influence on the daily choices. The album genre is some sort of modern indie lyrical jazz. The colorful cultural backgrounds of the band members (Taiwan, Portugal, Italy and Israel) crystalize into one unique texture of multicultural contemporary jazz. The aspect of multiculturalism is very present in my project, as I myself was brought up in a multicultural house, (Argentinian-Romanian) in Israel and as a child, absorbed South American music and classical music alongside Middle astern music, Israeli folk and jazz. The band is consisting of Julian Wittich (b), Elena Pisano (p), Massimo Imperatore (g) and João Guerra (d).

Hila Hutmacher – Strangers In My Dreams

Not long ago a friend of mine who has been working as a music professional for decades, suggested that it may be a good idea to get rid of all musical genre names and just call music MUSIC. Louis Armstrong, Duke Ellington and Miles Davis made comments in the past that point in that direction as well. I thought of this during the first listening session I devoted to Hila’s debut album. I heard so much originality combined with a thorough knowledge of various musical traditions that labelling seems a waste of time. Her highly personal approach in compositions and lyrics allow you to enter her musical world as a welcomed guest, or rather, friend.
She does not make any useless attempts to hide certain influences: including these in her own artistic concept feels more as a respectful tribute.
What I also like is that within her obvious control of how her music should sound, she allows her fellow musicians, all great players, lots of space to express their class and understanding of Hila’s concept.

The production is personal, crisp, intimate but also strong. A bit like the combination she describes in Song For a Butterfly.
Strangers In My Dreams is full of beautiful paradoxes: for instance, it has a timeless quality to it but also very much refers to the times we currently live in. This makes Hila a powerful figure in the music world and I am sure her voice and vibe will touch the hearts of many open minded listeners.
Speaking of open minds: I wish the late George Duke could have heard the title song because I am convinced he would have included it in his own repertoire right away.
Hila’s debut: delightful in many ways!
Co de Kloet
Creative Catalyst